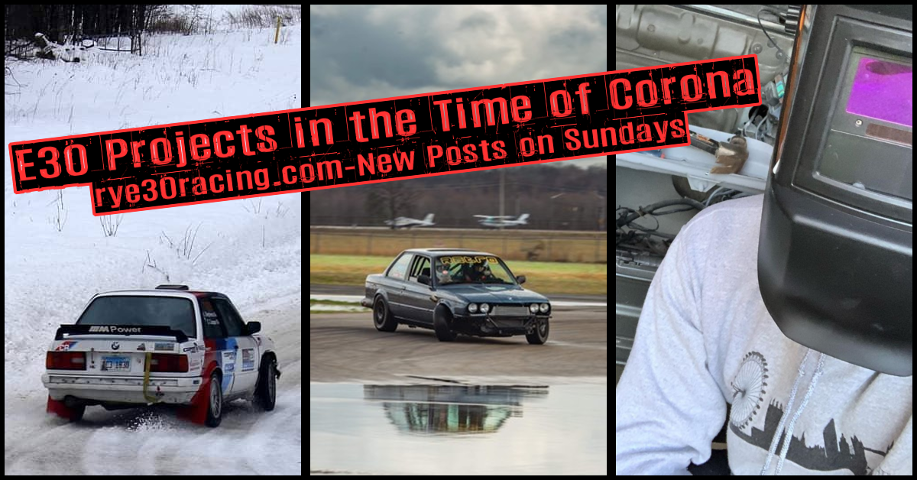 E30 Projects in the Time of Corona: Part 1

COVID-19 has fundamentally changed everyone’s way of life. For those of us that love our E30s, it’s made life practically unbearable. The worst thing to happen to anyone, EVER, has happened to us collectively as enthusiasts of this particular car and its variants. Without warning, we pounced on the inboxes of some of our favorite Instagram accounts to see what they were up to while they are self-isolating. We haven’t had much opportunity to work on ours, but these folks have, and if you’re one who enjoys being forced to live vicariously in this digital age, oh boy, do we have something for you. Enjoy!

Calvin and Kelsey of “Cooper Autoworks BMW” fame, were already facemask-deep in preparation for the upcoming rally season by the time most people had started isolating. On top of swapping out their M50 for a tuned-up M54, they’re also documenting the Frankenstein-monstering of their shop-yard E46 in their new Project Schmutzwagen YouTube series. Kelsey is also the focus of a recent RYE30 Racing article on women in motorsports and you can check that out here!

Grant took his grocery-getter from grandma-uses-it-to-get-to-singles-night-at-the-bingo-hall to grandma-uses-it-to-lure-young-men-into-her-BDSM-dungeon by tossing a “fat turbo”, BC coilovers, and a rollcage at it. Now he rather impressively rips skids while representing Retro Race Co. at drift events like Slammedenuff’s Stoopicold. Right now, he’s cleaning out the engine bay and dropping in the only thing that’s more American than bald eagles; the LS. Check out his team’s Instagram below, or if you’re worthy, beg Grant to let you follow his private Instagram here.

@off_joee – Almost Literally From the Ground Up

We’d be doing Joe a disservice if we tried to sum up his build better than he already has:

“…I’ve always worked on cars since I was young, I spent most of my life with my grandad, so we would work on cars and other stuff through the summers. The first time I saw an e30 was when I was watching and listening to Tyler, The Creator. So I said to myself one day I’ll have one of those and me and my grandad will fix it up. In the last few years my grandad has developed dementia and now lives in a home. So I’m fixing mine up because I know he’d be proud of it and we would have done it together 🙂“

Check out his Instagram below and follow the very detail oriented restoration of this Brits M40-powered E30!

@robsgarageisfull – Full of Cool Stuff, That Is

Rob is in the final stretches of the most pain-in-the-ass repair you can do on an E30; the sunroof. But he won’t be friends with boredom for long because an old outboard motor and a classic GSXR are next on the to-do list. Rob comes across our Instagram feed often, but not so much that he doesn’t get lost in the scroll, so we’d advise you give his profile a good read because it’s not just his garage that’s got cool stuff. You can check out his bikes, him and his wife’s adventures in nature, and if you were told that no man is perfect, he’s also an artist!

@robotronan – They’re basically us, if the three of us got married to each other like in Netflix’s Tiger King.

The Robotronan crew members are our spirit animals. Josh and Amanda race their M42-driven E30 in Texan autocrosses (yee-haw) and do very well (2019 was an award winning season for both of them), as you’d expect from a team driving a car that’s set up almost exactly the same way our is! There will be more on that later when we dig into their story for a future article. In celebration of the virus, Josh refreshed the power steering system with Chase Bays equipment. Josh was also going to pick up an engine with the intent of rebuilding it, but was coughed on by the universe, and has resorted to, eerily, another RYE30 Racing-similar activity; fussing about with Alfa Romeos.

Unfortunately, @robotronan was the victim cyber-crime and the newness of his current account seems to be causing some issues with our ability to embed his page, so follow his new Instagram here. Hopefully you’ll get the same kind of ‘autocrushing’ updates you’ll be, again, hopefully, be getting from us in the summer.

Thanks for reading and don’t forget to follow us here on the blog, Instagram @rye30racing, and Facebook @rye30racing. If you’ve read this far and you reside in the United States, give us a follow on Instagram and then DM us an address and we’ll send you two free 4″ RYE30Racing stickers! We appreciate your support! See a picture of the stickers below.

We’ll be racing plenty over the summer so we can bring you more high quality content like you read above. Our partnership with Diagonalt is still new and exciting, like that of a new romantic relationship, so check out Diagonalt.com for classic BMW prints and coasters (16% off using code “RYE30” at checkout) and calendars for the new year.

We're a small team of regular fu...folks who beat up an old E30 because we all otherwise have fairly reliable, and mundane daily driving vehicles that we use to ferry parts for the E30 back and forth from the abyss. View all posts by Duncan Millar