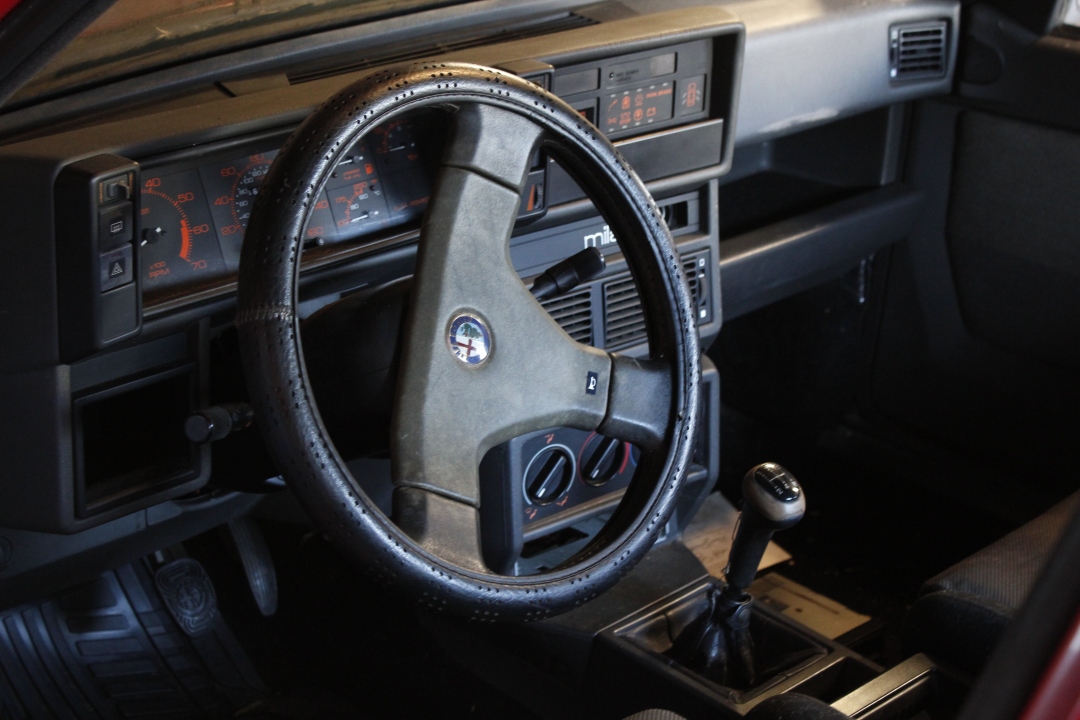 Our favorite one-eared Brazilian recently happened upon three, no-strings-attached, late 80’s Alfa Romeo Milanos for the price of a church potluck paper-plate-full-of-spaghetti on craigslist. The previous owner intended that they all power-up like a Power Rangers Megazord, but unforeseen circumstances derailed that plan like a hyperblast from a Rita Repulsa villain. We thought it would be fun to test our tetanus inoculations and bring you a diary entry about our day, so we apologize in afterthought for the too-rad-for-you Mighty Morphin’ reference, and apologize in advance for the non-E30 related content this week.

A.M. had little intention of fighting intergalactic crime with these heaps of overcooked Italian fare from the start, so a full-blown group effort from the core RYE30 Racing team and free-agents Eric Rood, Kevin C., and Michael “Spuds” Spadaro, got all three to their respective foster homes after some matter of paleontological digging, proper PPE, and lots of all-purpose Italian seasoned language.

Sadly, it’s not full of manicotti, drenched in sun-dried tomato sauce. But it certainly looks like it’s been microwaved at Olive Garden. This one has some fun bolt-ons, like Sperry (or at least Sperry-esque) exhaust manifolds, but it has the worst body by a fettuccine noodle length. The rust has consumed nearly all of the metal below the rear seats and trunk. So much so that it was almost impossible to lift the car with the floor jack we brought to service the wheels if they were too flattened, which of course, they were. The interior is as much of a bio-hazard as “The Black One”. We’ll spare you the horror of showing you those pictures. It will serve the rest of its short life as a parts car for the other two and then eventually be scrapped.

After a valiant effort to jump it was all for nought, we called the tow truck. And while it cleaned up better than a stainless steel saucepan after rinsing out the last of the marinara, Kevin’s journey with this car has been a bit of a pain. Check out his Instagram below for updates.

A.M. already has an Alfa Romeo Spider project that he’s nearly 18 months into, so this curse will be getting passed on to his brother. Free of mold, as far as we can tell, it has the coolest interior with its timely dash and classic Recaro seats. It runs for a few moments at a time with the power of starting fluid and we theorize that it has the potential to move and stop under its own power.

Altogether, they’re bitchin’ cars. Transaxles and quintessentially square aesthetics will give that impression. It would have been a lot of fun to turn them into Radwood entries, but we like to live within the means of our time, money, and sanity here at RYE30 Racing. Instead, we did what we thought was best for the cars; put one down to end its suffering and force the other two on suckers who are nearly as gluttonous for punishment as we are. We look forward to seeing what the red and black one’s turn into and hope that it’s not spaghetti noodles at the hands of a metal-scrapping heavy-duty shredder.

Thanks for reading and don’t forget to follow us here on the blog, Instagram @rye30racing, and Facebook @rye30racing. If you’ve read this far and you reside in the United States, give us a follow on Instagram and then DM us an address and we’ll send you two free 4″ RYE30Racing stickers! We appreciate your support! See a picture of the stickers below.

We’ll be racing plenty over the summer so we can bring you more high quality content like you read above. Our partnership with Diagonalt is still new and exciting, like that of a new romantic relationship, so check out Diagonalt.com for classic BMW prints and coasters (16% off using code “RYE30” at checkout) and calendars for the new year.

We're a small team of regular fu...folks who beat up an old E30 because we all otherwise have fairly reliable, and mundane daily driving vehicles that we use to ferry parts for the E30 back and forth from the abyss. View all posts by Duncan Millar

Yada yada yada, one front #coilover conversion is complete and once my blood circulates back to our extremities, it will be installed.
Bought a used set up Hyperco springs for the #E30 and a cheap set of coilovers to slide them on. But after confirming the rear springs might not seat completely, one pair got the lathe treatment. They'll get set aside to focus on putting together the Ground Control camber plates Iwe got in the deal too. After we thaw out, that is.
Director of Photography: @thelobrim
@smillark showed me how it's really done in the slowest car on the track.
Our clearly, very, very, homemade motor mounts are installed. At great cost to our sanity.
@motor_otaku extolled the virtues of v-bands upon thee and we'll forever forsake any other type of exhaust coupling. @jbirdbakes, I borrowed some of your chalkboard paint for my impromptu checklist.
Loading Comments...
%d bloggers like this: